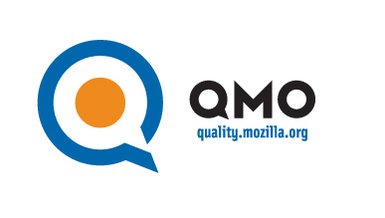 Let’s take a moment to remember what we did in 2017 for Mozilla. Walk through the past shows the path for future. Every contributor of Mozilla India is up in joy as their past year have a lot to be listed. The curve of Learning and contributions have a significant increase for every individual contributor. Though we’ve lot of contributors at Mozilla India contributing to different projects, organizing events and promoting the mission of Mozilla but what we believe is that

“Quality rather than Quantity counts.”

Now, it’s time to show our quality. Mozilla India is very happy and excited to showcase our QA contributions to Mozilla. In 2017, Mozilla India had 70+ vibrant number of contributors who worked with full fire throughout the year and participated on 100+ events. They actively involved themselves with huge passion in various QA bug events like Bug Triage Day, Bug Verification day, QA Test Day, Reporting bugs, etc on both offline and online. The help of our QA contributors was not limited only to Test Day events. They started teaching the web to others. Several QA contributors organized bug events in their college campus club and brought many new contributors to the web. And they are responsible and playing a vital role in bringing up the count 71 this year. Currently, we have 200+ members in our MozillaIN QA telegram channel to share each other view on various QA projects going on. Mozilla India community wants to convey a special thanks to all of them for their hard work and supporting us in several ways.

Here are our proud 71 contributors

After a vigorous analysis, Mozilla India is very excited and happy to congrats our top 5 QA champions who owns the title QA Contributor of the year 2017. 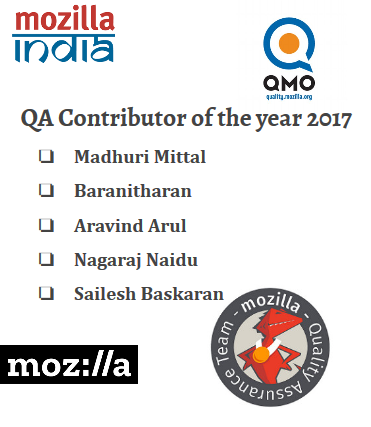 Apart from bug events we organized and involved ourselves in many important campaigns. Here are few Interesting experience we had hosting an event for testing.

“Women shouldn’t be afraid to put themselves forward” - Sarah Wood

We- The Womoz did it!! To celebrate the International Women’s day and women in tech, our QA contributors organized events with their respective campus club on March 8, 2017 and had hands-on in QA for women where many of them were non-mozillian and helped women students to join this huge community.

During the month of May and June 2017, we organised a campaign called India Uses Firefox Nightly to target more power users for nightly in India which will bring stable Firefox build in future. Thanks to Mr. Biraj Karmakar who initiated this campaign in India. Report says nearly 15 events was organized around India successfully and had a great social media impact. Mozilla India is proud to convey thanks to all the organizers for establishing this campaign in their local communities.

October was a very special month for mozilla, every mozillian consistently worked day & night for launching #newfirefox called Quantum. To test the power of Quantum, Mozilla community organized Firefox Quantum Sprint for its flexibility towards all the websites around the world. As a part of this happy moment, Mozilla India enthusiastically organized nearly 50 events around India and tested 1000+ compatibility sites.

In the end of the month we had a QA call for newbies to help them participating in QA Test Days. In case you missed the call. you can watch the video in YouTube.

That was an amazing time we had together as a community in the proud name of Mozilla India. Words are powerless to express the gratitude for the community members for taken initiatives to achieve this metrics and for supporting us in all aspects. Last but not least Mozilla India would like to thank Mr. Mihai Boldan, Mr. Mike Taylor and Mr. Pasal Chevrel for mentoring us.

Many thanks to Mr. Prasanth, Mr. Surentharan, Ms. Fahima Zulfath and Ms. Krishnaveni for supporting us on organizing the bug events. We are looking for tremendous powerful contributions from all of you in upcoming QA days.

#MozLove to all the contributors, because you are the key to this success community!!!